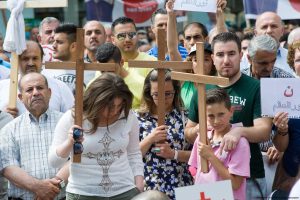 Many Arab authoritarian regimes have tried to portray themselves as protectors of religious minorities in order to strengthen their political legitimacy, in particular towards the West. This is notably the case with the Syrian regime under Bashar Al-Assad. A similar discourse could be observed in Egypt, Iraq and Morocco as well. Jihadi movements opposing these regimes have also used the same claim of minorities’ support to authoritarian regimes to justify their violent attacks against religious minorities, as with the attacks committed by ISIS-Egypt against several Coptic churches in recent years.

Alessia Melcangi is a Research Fellow at the Sapienza University of Rome and collaborates with the Centre of Research on the Southern System and the Wider Mediterranean (CRiSSMA – Catholic University of Milan). Her research mainly focuses on the contemporary history of North Africa and Middle East, with particular attention to the social and political dynamics in Egypt.

Gennaro Gervasio is currently a senior lecturer in History and Politics of the Middle East and North Africa in Roma Tre’s Department of Humanities. His research interests include civic activism and social and protest movements in the Arab World.

Georges Fahmi is Research Fellow at the Middle East Directions Programme of the Robert Schuman Centre. His main research area is religion-state relations in the Middle East.