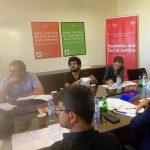 The project seeked to understand the challenges facing the Christian communities in Egypt, Syria, Iraq and Lebanon. Many studies treat Christian communities in the Middle East as a homogenous community that has no agency. This research project, however, seeked to challenge these two assumptions: first, it seeked to deconstruct the category of “Christians”, and focused rather on the various Christian actors within each case; second, it analyzes how the various national institutional environments influences these actors’ ideas, interests and strategies.

The main question this research aimed to answer to is how the “Arab spring” has influenced the dynamics within the Christian religious sphere, and between the Christian actors and other political actors such as the political regimes or the Islamist forces. In order to answer this question, the project focused on two types of actors and two level of interactions. In terms of actors, the project includes those who insist on their religious identity, as it the case with the Church and those who subscribe to a larger identity that goes beyond religion as is the case with Christian politicians. In addition, in each case study the research team analyzed two levels of interaction: the interaction with religious/sectarian actors, and with political actors and state institutions.