The research track aims to inform policy-makers in Europe and Libya through analysis of the key dynamics and ongoing transformations in the country, based on fieldwork and close collaboration with local analysts and researchers. MEDirections has also started to mentor and provide support to junior Libyan analysts.

The dialogue support track is based on a partnership with a group of Libyan community activists, the Peacemakers. While the Peacemakers have been involved in various dialogue and peacebuilding initiatives since January 2015, they have since mid-2017 been focusing on conducting a wide-ranging, grassroots dialogue around a new social contract for Libya. Discussions have focused on the concept of and need for a new social contract, as well as the common basic rules and values that can form the basis of such a contract between the different components of the Libyan society.

MEDirections provides material, logistical and analytical support to these activists’ efforts to promote peace and reconciliation across Libya, while the dialogue process remains wholly Libyan designed and led.

To date, the dialogue around the social contract has:

>> For our latest publications and events, and for more information on our research activities, please visit our Research Activities page. 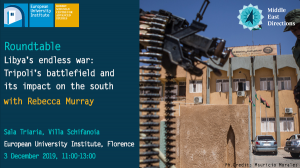 Listen to the PODCAST 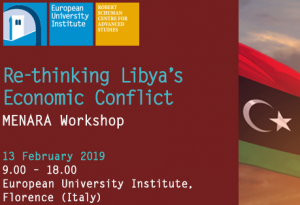 >> To get in touch with the Libya Initiative team, please contact us on  MED.Libya@EUI.eu

Tensions rise in Libya’s Sirte as the city becomes central to the conflict, Omar Al-Hawari, 12 October 2020.

The impact of coronavirus and the continuing war on Tripoli and Western Libya, Mohamed Saleh Belqasem, 16 April 2020

Libya’s Sirte is preparing for a war of a different kind, Omar Al-Hawari, 27 March 2020

Both MENA regimes and opposition groups are closely following the formation of the new US administration, in particular the names of those who will be in charge of Middle Eastern files, in order to figure out the directions of US END_OF_DOCUMENT_TOKEN_TO_BE_REPLACED
View Calendar
Add
Tweets by @MEDirections