Since 2010, the South and East Mediterranean Countries (SEMCs) and the Middle East have witnessed profound geopolitical shifts, prompting extraordinary levels of unpredictability and instability. At the domestic level, various deep-reaching social and political changes have been unfolding amid contestation processes.

The effects of new patterns of contestation during the so-called Arab Spring live side by side with long-lasting domestic dynamics such as sustained demographic pressures (youth bulge, rural exodus) and the polarization of sectarian politics and communal strife.

At the same time, other geopolitical shifts like the growing importance of violent and non-violent non-state actors, nuclear proliferation, failed and fragile states, forced migrations and changes in the distribution of natural resources are reshaping many of the traditional features of the pre-2011 geopolitical order, while others may have the potential to do so in the near future. Consequently, understanding the nature, scope and depth of these transformations becomes crucial for fully evaluating how the regional geopolitical future may look like.

The Middle East and North Africa Regional Architecture: Mapping geopolitical shifts, regional order and domestic transformations (hereafter, the MENARA Project) studied the geopolitical order in the making, identified the driving forces behind it, shed light on bottom-up dynamics and assesses the implications of these processes on the EU and its policies towards the region.

In order to do so, the MENARA Project posed a single all-encompassing question to help articulate a consistent and coherent research project: Will the geopolitical future of the region be marked by either centrifugal or centripetal dynamics or a combination of both? The project was articulated in three levels of analysis (domestic, regional and global). To answer this research question we examined how it could be translated and applied at each of these levels.

– To conceptualise the notions of “order” and “region” in light of the geopolitical shifts underway in the SEMCs and the Middle East.

– To identify and map the domestic, regional and global dynamics and trends that shape the regional order.

– To identify and map the key domestic, regional and global actors that shape the regional order, and enhance knowledge of their mutual relations and interdependence.

– To inform EU policies and strategies through policy-relevant analysis and the production of targeted policy recommendations based on the systematic evaluation. 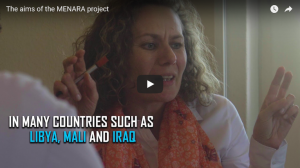 The MENARA project has received funding from the European Union’s Horizon 2020 research and innovation programme under grant agreement No 693244.