Home »MED Round Tables»MEDirections Roundtable | Conversion to Islam in the West — and Conversion of the West to Islam? 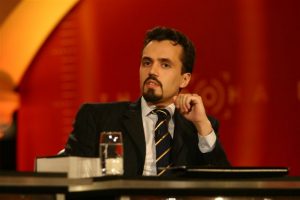 The subject of conversion to Islam in the West has been a topic of some interest over the past few years in particular, but usually owing to security concerns. This talk will seek to put some of the issues around conversion to Islam in a more historical and wider context, where we look at how Muslim Europeans in particular and Muslim Westerners in general have been perceived, as well as what cultural bridging they have done. It will also discuss the backlash against that, in terms of accusations of ‘civilisational treason’ and ‘cultural apostasy’.

Hisham Hellyer, Senior Fellow at the RH Centre for the Middle East at the Atlantic Council in DC and Associate Fellow in International Security Studies at the Royal United Services Institute in London.

Biography   A scholar and author focusing on politics, religion, and security studies in the West and the Arab world, Dr. H.A. Hellyer is a non-resident Senior Fellow at the RH Centre for the Middle East at the Atlantic Council in DC and Associate Fellow in International Security Studies at the Royal United Services Institute in London. Following the 2005 London bombings, he was appointed as Deputy Convenor of the UK Government’s Taskforce on tackling radicalisation, and served as the Foreign & Commonwealth Office’s first Economic and Social Research Council Fellow as part of the ‘Islam’ & ‘Counter-Terrorism’ teams. Dr. Hellyer was also appointed adjunct full Professor at the Centre for Advanced Studies on Islam, Science and Civilisation in Kuala Lumpur, Malaysia, and is included in the annual global list of ‘The 500 Most Influential Muslims’ in the world (‘The Muslim 500’) & the “Power 100”. A public intellectual, Dr. Hellyer’s insights on current events in the Arab World, Europe, and Muslim communities worldwide are regularly sought by the international media networks such as CNN, BBC and Al-Jazeera. He is currently on the steering committee for a multi-year EU-funded project on radicalisation, secularism and the governance of religion, entitled “GREASE”, coordinated by the EUI, and which brings together European, North African, and Asian perspectives with a consortium of a dozen or so universities and think-tanks. The GREASE project is coordinated by EUI’s own Professor Anna Triandafyllidou, Robert Schuman Chair of the Robert Schuman Centre for Advanced Studies.