MEDirections has been working with the Peacemakers since 2015 to facilitate social dialogue for peace and reconciliation. This initiative was born out of the Peacemakers’ understanding that any political agreement between rival factions in Libya could not bring about positive and sustainable results without wider, grass-roots participation in dialogue. They therefore sought to promote a broad, inclusive reconciliation and social peace process, to create a basis upon which national-level political and legal solutions to the conflict could be built.

The Peacemakers’ capacity to play such a convening and steering role stems from the continuity of their involvement in social dialogue and the concrete results they have achieved, enabling them to build a reputation among community leaders and influential actors as credible and successful dialogue facilitators.

The Peacemakers’ work can be divided into several phases, which have each built upon the others. 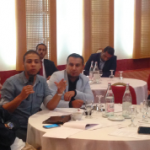 The Peacemakers’ success comes from their ability to mobilise and engage Libyans with real influence on the ground who can in turn facilitate the implementation of concrete initiatives. The team has a specific vision and work plan to implement and has made innovative use of traditional social mediation techniques to build consensus and steer participants towards the achievement of goals.

The first two phases have already resulted in concrete and sustainable outcomes including:

The dialogue was initially developed in partnership with the Norwegian Centre for Conflict Resolution (NOREF), and is currently supported by the German Federal Foreign Office.