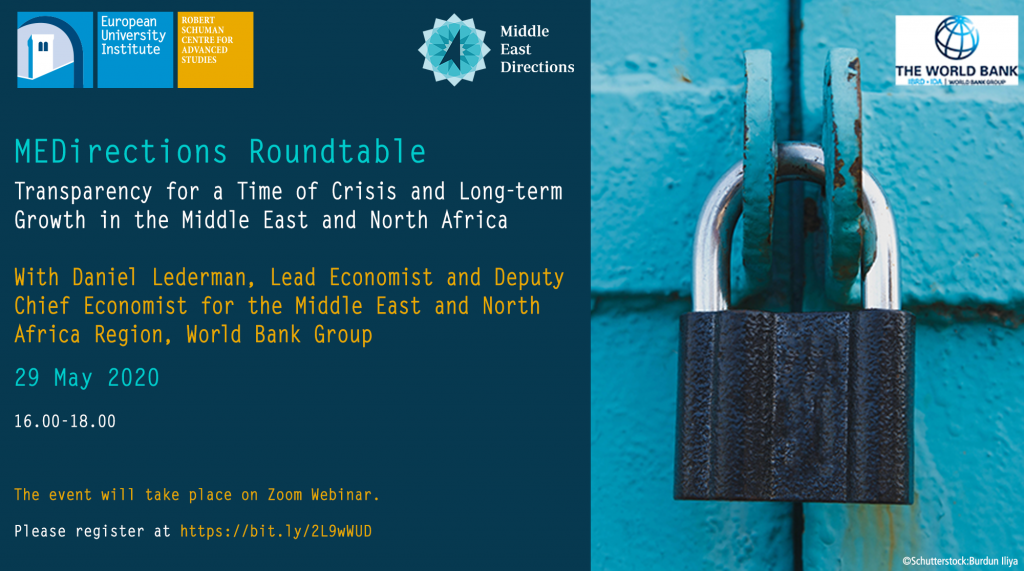 Abstract | Due to the dual shocks of the spread of the virus and lower oil prices, World Bank economists expect output of MENA to decline in 2020. This is in sharp contrast to the growth forecast of 2.6 percent published in October 2019. The growth downgrade of 3.7 percentage points is arguably a measure for the costs associated with the dual shocks of Covid-19 and the oil price collapse. These numbers are tentative. The true impact depends on future developments of the dual shocks, policy and society’s response, which depends on the transparent use of health and economic data.

We recommend a two-step approach: It might be desirable to focus first on responding to the health emergency and the associated economic contraction. Fiscal consolidation and structural reforms associated with the persistent drop in oil prices and pre-existing challenges are also very important, but with proper external support, can wait until the health emergency subsides. Nevertheless, the MENA region has challenges that predate the crisis – it has been growing far slower than its peers. Had MENA’s growth of output per capita been the same as that of a typical peer economy over the past two decades, the region’s real output per capita would be at least 20% higher than what it is today. A large part of MENA’s low growth is arguably due to a lack of transparency. MENA is the only region that dropped in data transparency and capacity since 2005. We estimate that this has cost MENA 7-14 percent in GDP per capita losses since 2005.

Lack of transparency hinders credible analyses of many important issues, two of which are highlighted in the report. First, lack of data transparency hampers credible analyses on the region’s debt sustainability – an important issue to examine after the crisis. MENA countries vary greatly in their debt reporting standards. World Bank economists and other external analysts do not have access to vital information about many types of public debt. Second, the unemployment and informality numbers in the region are debatable since MENA countries rely on varying definitions of employment with little harmonization across the region or with respect to international standards. This affects analyses of unemployment and informality.

This event will take place on Zoom. You will be sent the Zoom link once you have registered.