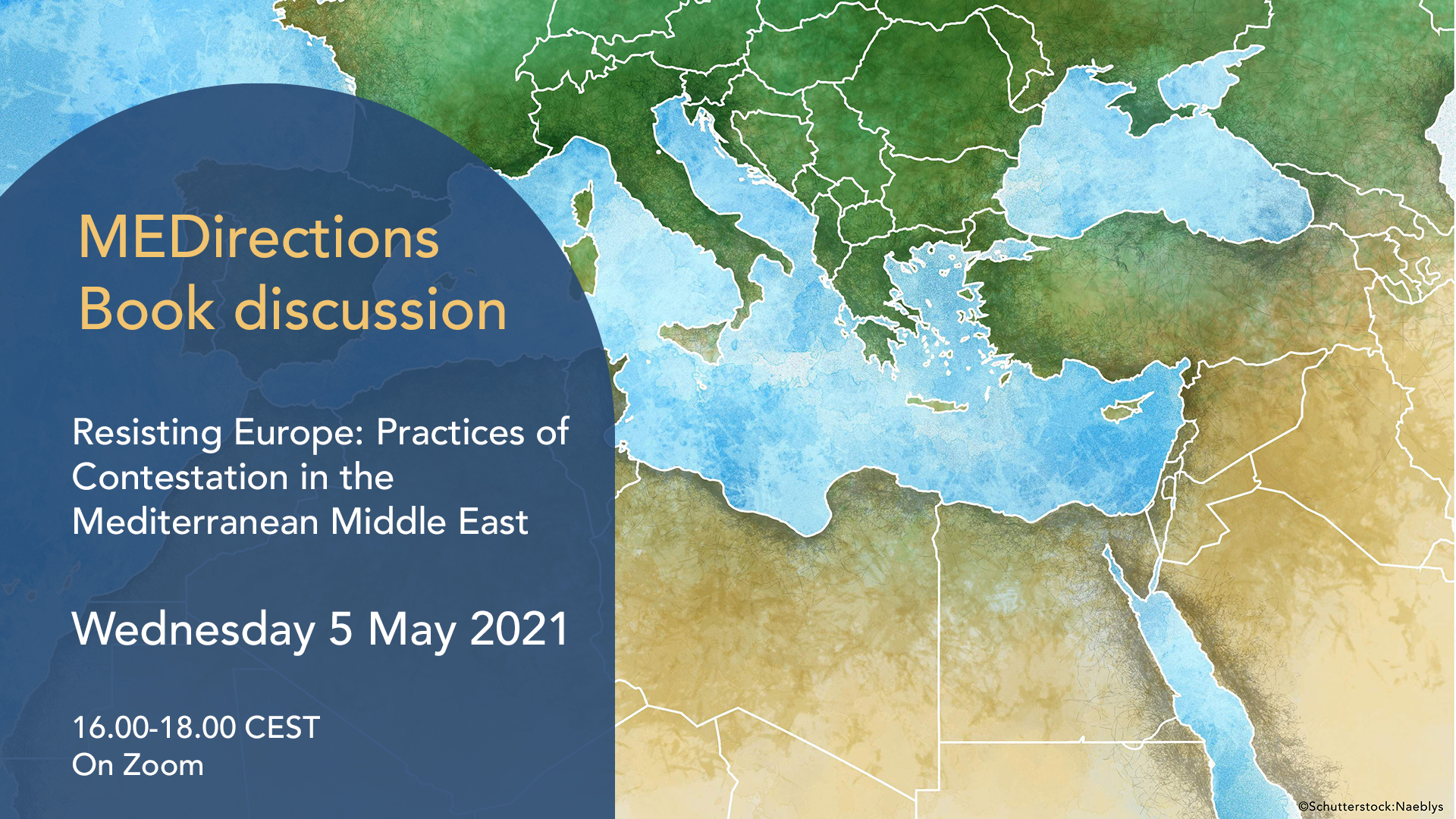 The recently published book Resisting Europe: Practices of Contestation in the Mediterranean Middle East conceptualizes the foreign policies of Europe—defined as the European Union and its member states—toward the states in its immediate southern “neighborhood” as semi-imperial attempts to turn these states into Europe’s southern buffer zone, or borderlands. Within this frame, it examines the diverse modalities by which states in the MENA region reject, resist, challenge, modify, or entirely change European policies and preferences. The book provides rich empirical evidence of these contestation practices in the fields of migration and border control, banking and finance, democracy promotion and telecommunications.

Through this roundtable discussion with contributors to this volume, we aim at unpacking the complex question of when and how MENA states capitalize on their leverage and interdependence in their relationships with Europe and contributes to a more comprehensive understanding of Europe-Middle East relations, while engaging with broader debates on power and interdependence, order and contestation in international relations.

Raffaella A. Del Sarto is Associate Professor of Middle East Studies at the Johns Hopkins University School of Advanced International Studies (SAIS), SAIS Europe in Bologna. She is the author of Borderlands: Europe and the Mediterranean Middle East (forthcoming with Oxford University Press); Israel under Siege: The Politics of Insecurity and the Rise of the Israeli Neo-Revisionist Right (Georgetown University Press, 2017); Contested State Identities and Regional Security in the Euro-Mediterranean Area (Palgrave Macmillan, 2006).

Tamirace Fakhoury is Associate Professor of Political Science & Global Migration and Refugee Studies at Aalborg University. Her publications include Democracy and Power-Sharing in Stormy Weather: The Case of Lebanon (Springer, 2009); “The European Union’s Engagement in Con­flict Processes and Conflict Spillovers: The Case of Lebanon since the Outbreak of the Syrian War,” European Foreign Affairs Review 22, no. 1 (2017); and “Multilevel Governance and Migration Politics in the Arab World: The Case of Syria’s Displacement,” Journal of Ethnic and Migration Studies 45, no. 8 (2019).

Asli Selin Okyay is a Senior Fellow at the Istituto Affari Internazionali (IAI) in Rome. Her publications include “Turkey’s post-2011 Approach to its Syrian Border and its Implications for Domestic Politics,” in International Affairs 93 (4), and (with Jonathan Zaragoza Cristiani) “The Leverage of the Gatekeeper: Power and Interdependence in the Migration Nexus between the European Union and Turkey,” in International Spectator 51(4), 2016.

Simone Tholens is Senior Lecturer in International relations at Cardiff University, Visiting Fellow at the European University Institute/MED Program on a Leverhulme Fellowship, and Associate Fellow at Johns Hopkins University SAIS Europe. Her publications on intervention and contestation include “Winning the post-war: norm localisation and small arms control in Kosovo and Cambodia”, Journal of International Relations and Development 22(15); and “Border management in an era of ‘statebuilding lite’: Security Assistance and Lebanon’s hybrid sovereignty” in International Affairs 93(4).