Home »MED Round Tables»The new Syria: Land confiscations and the right to return for refugees 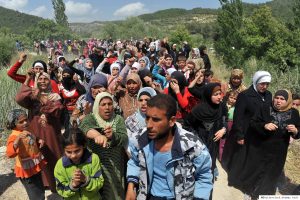 After more than 8 years of armed conflict, Syrian regime forces – together with Russian and Iranian allies – have managed to restore their control over most of the territory that was previously held by the opposition forces. In parallel, the Syrian government has issued a number of legislations to regulate the status of property, as is the case with the new 2018 property law number 10. On the one hand, the Syrian government promotes the law as an urban-planning measure that allows for the creation of designated redevelopment zones for reconstruction across Syria.  On the other, the Syrian opposition blames the law for leading to millions of Syrians losing their homes.  According to the law, local authorities are to request a list of property owners from the area’s public real estate authorities. Those who fail to provide ownership documents risk their properties being reverted to state authorities.

This roundtable is co-organised with COSPE Onlus. It seeks to examine these new regulations issued by the Syrian government, and to what extent it might encourage or rather discourage Syrian refugees from returning to their homes. It will also examine other factors, such as transitional justice issues, that could affect the return of refugees from the neighboring countries (Lebanon, Turkey and Jordan).

Samer Aldeyaei is the Executive Director of the Free Syrian Lawyers Association, a civilian NGO that works to strengthen the rule of law and justice for all Syrians.

Asyad Almousa is a co-founder of the Free Syrian Lawyers Association. Member of the Committee for the Defense of Detainees in Raqqa in 2011, and co-founder of the Raqqa Governorate Free Council in 2012, Asyad is member of the Syrian Legal Network in the Netherlands, and Representative of the Center for the Rule of Law and Good Governance in Europe.

NB – The MEDirections roundtables take place on a regular basis on the fourth Monday of each month. To know more on our roundtables, please visit: https://middleeastdirections.eu/events/medirections-roundtables/