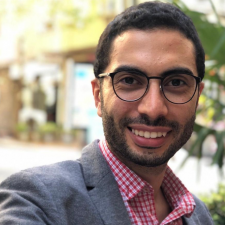 Tamer Badawi is a non-resident Programme Associate at the Middle East Directions Programme of the Robert Schuman Centre for Advanced Studies, European University Institute (EUI) in Fiesole, Italy. Badawi was previously affiliated with the School of Transnational Governance at the EUI as a Policy Leader Fellow (resident) and previously affiliated with the Al Sharq Forum in Istanbul as a research fellow (resident). He specializes in analysing Iran’s foreign policy towards its Arab neighborhood. His research interests include Iran’s relations with militant non-state actors, multiple-track diplomacy between Iranian and Arab elites, Iran’s non-oil and energy trade with countries in the Middle East/West Asia under economic sanctions, and the water-energy nexus in Iran.

Iran is at the centre of the geopolitical turbulence in the Middle East. Since the Islamic revolution, Iranian regional policy has become one of the main drivers of the confrontation between the West and the Islamic Republic of Iran. Tehran’s END_OF_DOCUMENT_TOKEN_TO_BE_REPLACED
View Calendar
Add
Tweets by @MEDirections