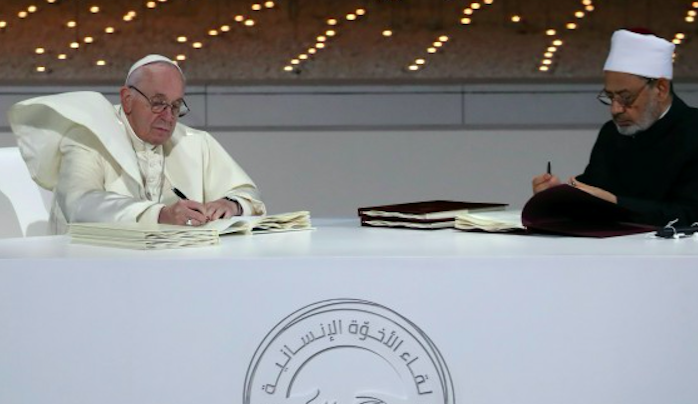 In February 2019, Pope Francis and the Grand Imam of al-Azhar, Sheikh Ahmed al-Tayyeb signed a historic declaration of fraternity, calling for peace between nations, religions and races in Abu Dhabi, UAE. This document was not only the outcome of the February 2019 meeting between the two religious figures, but it is also the outcome of several rounds of dialogue between the Vatican and al-Azhar that began in 2016. As dialogue between the two men reached a peak with the Abu Dhabi Declaration, it poses several research questions: What are the religious and political meaning and consequences of this declaration? Does the declaration represent a real evolution in the political theology of either al Azhar or the Vatican in their approaches to religious pluralism? Can the declaration be translated into an action plan? And with what impact on religious and political dynamics in the region? Answering these questions requires an understanding of the main actors involved in this process, the interests and ideas animating their support of the declaration, and the geopolitical and religious context to which the declaration responds.

Michael Driessen | Jean Monnet Fellow at the European University Institute and Associate Professor and chair of the department of Political Science and International Affairs at John Cabot University in Rome.