Despite being far from final political settlements, the scale and intensity of violence in war-torn countries seem to be somehow ebbing. With the repossession of Sirte and the reclamation of Mosul, Aleppo and Raqqa, the biggest of the battles are over. In the last two years, the Iraqi and Syrian central governments have come to hold the upper hand and Islamic State, as a territorialised terrorist organisation, has been almost completely wiped out in all three countries. Libya appears to be at a stalemate as a result of a balance in weakness.

Is it hence time to raise questions over the economic reconstruction of war-torn countries in the Middle East and North Africa? Who will pay for it, especially in a time of a global slump and low oil prices? And how will it be organised in the light of facts on the ground and the prevalent local, national and international dynamics of cooperation and competition?

The aim of this small workshop is to bring together on the one hand experts and researchers working on the three cases of Iraq, Syria and Libya, and on the other, those working on topics of reconstruction and post-conflict reconciliation. The meeting aims to stir debate, set a research agenda and augment networking efforts in preparation for the Middle East Directions annual conference in the autumn. 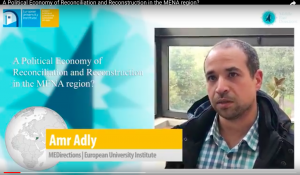