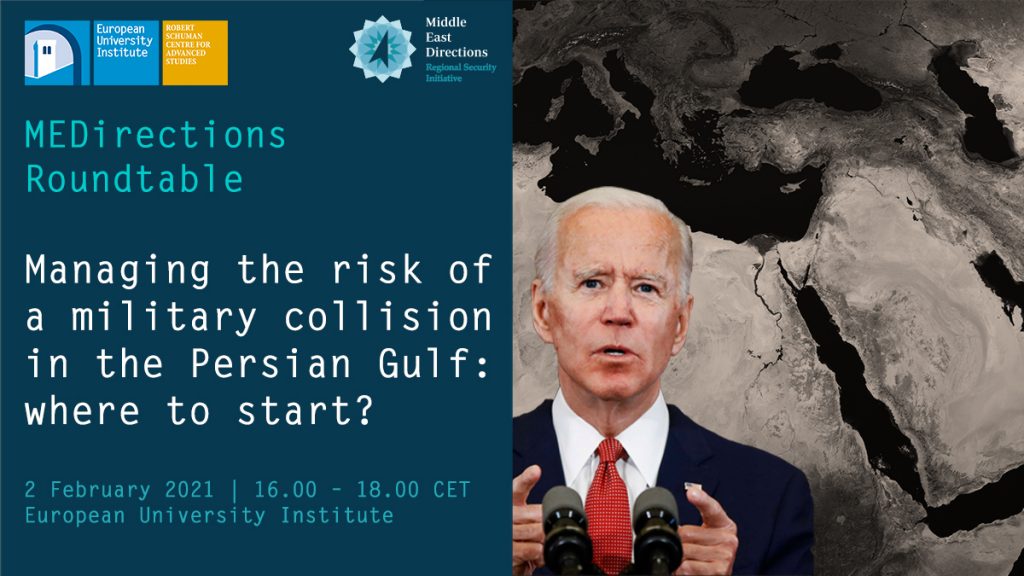 After the heightened tension between the United States and Iran during the Trump administration, the risk of an all-out war in the Persian Gulf has dangerously increased. While international attention is currently focused on the way the new US administration can politically engage with Tehran, military-to-military confidence-building measures can also contribute to reducing this risk and responding to possible emergency scenarios.

This roundtable will explore the role and feasibility of possible military de-escalation measures in reducing tension between the United States and Iran.

How will the Biden administration’s defence policies in the Middle East impact US-Iran military tension? What steps can be taken to transform the two countries’ current ‘uneasy state of deterrence’ into a more ‘stable deterrence posture’? How can US-Iran military-to-military contacts assist a regional dialogue on arms control and stability? Can a space for regional cooperation on maritime security in the Persian Gulf emerge under the Biden administration?

Luigi Narbone is the Director of the Middle East Directions Programme.

Abdolrasool Divsallar co-leads the Regional Security Initiative at the Middle East Directions Programme and is a Policy Leader Fellow at the School of Transnational Governance (EUI).

Giovanni Romani, Head of MENA section, North Atlantic Treaty Organization: is currently Head of the NATO Middle East and North Africa Section at the NATO Headquarters in Brussels. He is a former Italian Navy officer, in active duty from 1985 to 2006. He served as a combat operations electronic warfare and intelligence officer on several Italian and US ships.

Sanam Vakil is the deputy director of the Middle East North Africa Programme at Chatham House, where she leads the Future Dynamics in the Gulf project and the Iran Forum. Sanam’s research focuses regional security, Gulf geopolitics and on future trends in Iran’s domestic and foreign policy. She is also the James Anderson professorial lecturer at the Johns Hopkins School of Advanced International Studies (SAIS Europe) in Bologna, Italy.

Tytti Erästö is a Senior Researcher in the SIPRI Nuclear Disarmament, Arms Control and Non-proliferation Programme, focusing on nuclear disarmament and nonproliferation issues. Her research focuses on the Iran nuclear deal, the Nuclear Non-Proliferation Treaty, the Treaty on the Prohibition of Nuclear Weapons, missiles, and international efforts at establishing a WMD free zone in the Middle East

Mahsa Rouhi is a Research Fellow for Iran, Turkey and the Levant at the Institute for National Strategic Studies, National Defense University. She was previously a research fellow with the Non-proliferation and Nuclear Policy programme at The IISS. Her research primarily focuses on nuclear policy and security strategy in the Middle East, particularly Iran.

*The Zoom link and access details will be provided only to registered participants. Zoom links are emailed on the day of the event.