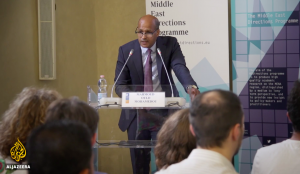 Middle East Directions (MEDirections) invites you to attend a lecture by Mohammad-Mahmoud Ould Mohamedou (Professor of International History, Graduate Institute, Geneva) on themes surrounding his recent book ‘A Theory of Isis – Political Violence and the Transformation of the Global Order?’.

What is the Islamic State and where does it come from? What new forms of globalised political violence has it ushered? How has the materialisation of the Islamic State impacted contemporary international history and politics? In a sequel to his Understanding Al Qaeda (2011), political historian Mohammad-Mahmoud Ould Mohamedou an original take on the armed group, discussing the social sciences perspective, unpacking its complex dynamics not merely solely in terms of its terrorist nature and its religious rhetoric but rather with a view to deepens our understanding of the group’s impact on the very nature of the meaning of contemporary post-modern political violence.

The lecture will be followed by a conversation with Prof. Olivier Roy before the discussion is opened to questions from the audience.

Professor Mohamedou was previously Associate Director of the Harvard University Program on Humanitarian Policy and Conflict Research, Deputy-Director and Academic Dean of the Geneva Centre for Security Policy and Research Associate at the Ralph Bunche Institute on the United Nations in New York.

He is the author of Iraq and the Second Gulf War (2002), Understanding Al Qaeda (2011) and A Theory of ISIS (2017), and co-editor of Democratization in the 21st Century (2016) and editor of State-Building in the Middle East and North Africa – One Hundred Years of Nationalism and Politics (forthcoming).

He contributed chapters to several volumes, notably Violent Non-State Actors in Contemporary World Politics (2010), Minding the Gap – African Conflict Management in a Time of Change (2016) and The UN and the Global South (2017).

In 2014, he was appointed by Kofi Annan as Commissioner in the West Africa Commission on Drugs, and is a member of the United Nations and African Union High Level Panel on Migration since 2017. In 2016, he was named by the New African Magazine amongst the top 50 most influential African intellectuals and, in February 2018, amongst the 100 Africans of the Year.