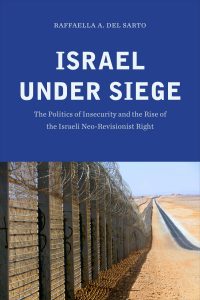 Book Presentation / Israel under Siege: The Politics of Insecurity and the Rise of the Israeli Neo-Revisionist Right

‘Israel under Siege’ examines the emergence of Israel’s neo-revisionist consensus about security threats and regional order, which took hold of Israeli politics and society after 2000 and persists today.

The failed Oslo peace process and the trauma of the Second Palestinian Intifada triggered a shift to the right; conflicts with Hamas and Hezbollah and the inflammatory rhetoric of Iranian President Ahmadinejad additionally contributed to the creation of a general sense of being under siege. While Israel faces real security threats, Israeli governments have engaged in the politics of insecurity, promoting and amplifying a sense of besiegement. Lively political debate has been replaced by a general acceptance of the no-compromise approach to security and the Palestinians.

The neo-revisionist right, represented by Benjamin Netanyahu and the Likud, has turned Israel away from the peace process and pushes maximalist territorial ambitions. But they have failed to offer a vision for an end to conflict, and there has been little debate about whether or not the hardline policies toward the region are counterproductive.

Del Sarto explains this disappearance of dissent and examines the costs of Israel’s policies. She concludes that Israel’s feeling of being under siege has become entrenched, a two-state solution with the Palestinians is highly unlikely for the foreseeable future, and Israel’s international isolation is likely to increase.

Raffaella A. Del Sarto is Associate Professor of Middle East Studies at the School for Advanced International Studies (SAIS), SAIS Europe in Bologna, Johns Hopkins University. At the EUI, she is a part-time Professor at the Robert Schuman Centre. Until March 2017 she directed the research project “BORDERLANDS: Boundaries, Governance, and Power in the European Union’s Relations with North Africa and the Middle East,” funded by the European Research Council. She was previously a Research Fellow at St Antony’s College, Middle East Centre, University of Oxford (2007-2011), and both a Marie Curie Fellow (2005-2007) and a Jean Monnet Fellow (2004-2005) at the EUI’s Robert Schuman Centre.

Raffaella holds a PhD in International Relations from the Hebrew University of Jerusalem.